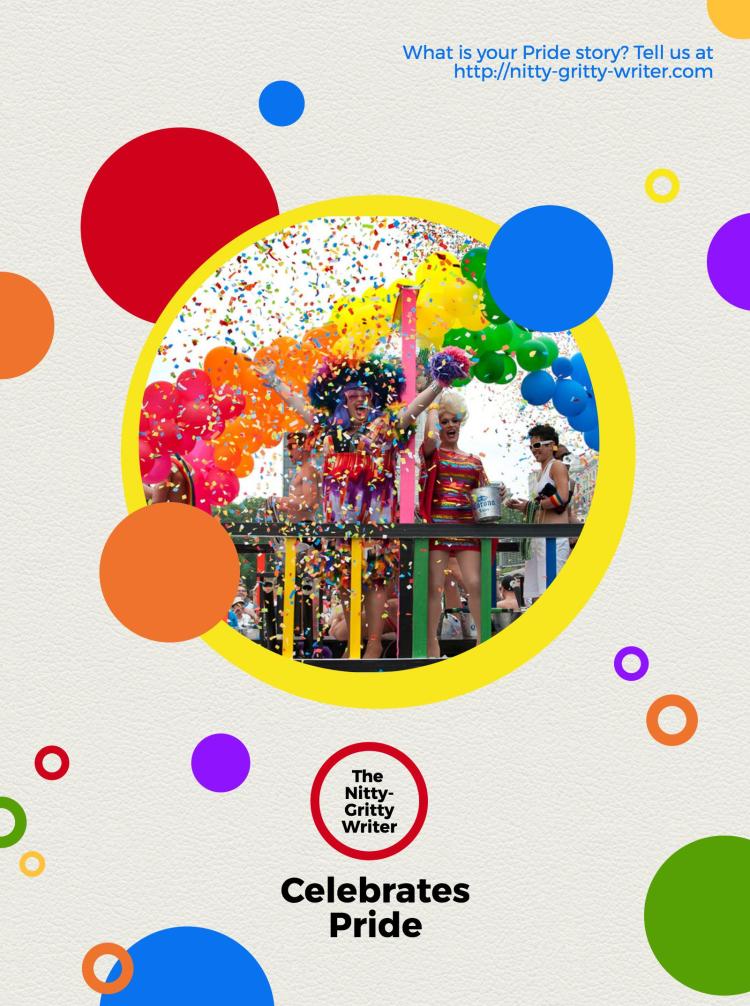 Typical childhood right of passage. Except I am a societally defined woman, and so is she. I remember thinking that I wanted to marry her. Hell, I would have even done the dishes for her. (Those of you who have read Rubyfruit Jungle will likely get this reference to the hetronormative role of the woman in a relationship.)

I did not breathe a word of my love to anyone, not even her. When she taught me how to kiss a boy, and I wanted to practice until my lips bled, I was silent. When we went skating and she was always picked for the couples skates, I watched for her to glance my way and silently pictured my arms around her slim waist. When we went to a bon fire by the lake, and she kissed her first boy, I stood silent in the darkness and cried alone.

The 70s scared me. I wish I was as brave as some others were. But I didn’t want to get stuffed in a trash bag by a serial killer like was happening to young men in California. I didn’t want to hide in a church, only to have someone set it on fire with me inside. And I certainly did not want to be diagnosed as mentally ill and stuck in an institution somewhere. (In December of 1973, the board of the American Psychiatric Association voted 13-0 to remove homosexuality from its list of psychiatric disorders.)

We had repeated electoral defeats, the crazy of Anita Bryant, and the murder of Harvey Milk. I remember a friend who talked of law school. She struggled between being true to herself or being refused access to taking the bar, because at the time being a lesbian meant she was considered to be of unfit moral character to be a member of the bar in 49 states.

There were parts of that time that made me smile. We had the first openly gay prom date, when Randy took Grady to his high school prom. We had the Rocky Horror Picture Show, The Village People, the 1979 march on Washington for lesbian and gay rights, back rooms, bars, and Donna Summer.

Perhaps as my favorite of the time, we had and Rita Mae Brown and “The Furies,” a lesbian-feminist collective started in 1971. It was short lived, but remains a very important reflection on and reinforcement of the vision these early feminists had of a world where lesbian women could live in peace with the rest of the world.

Yes. The 1970s scared me. I wasn’t brave. I pretended I was not different than everyone else I knew. In 1980 I got pregnant and then I got married. I wasn’t miserable, but I was sad. I carried that sadness everywhere I went between 1980 and 1983.

For me, 1983 will forever be the year of HER (even though our explosive time together lasted less than six months and no one ever knew about it except my husband and her sister).

“She is different,” my neighbor told me before she came.

I almost refused to come over. I almost refused to go to a bar with them at my neighbor’s request because she didn’t want to take her sister alone to “that kind of place.” Being the good friend I am, though (hahaha), I lied to my husband about where we were going, made out with her sister “to keep people from hitting on her,” and breathed a sense of happiness that I thought was gone forever.

That same year, I divorced, went to work for my aunt to survive as a single mom with two kids, met a woman, and found gay bars.

I will never forget driving to the back of the concrete block building with the blacked out windows. There were no lights in the front of the building and no identifying markers. I backed into the parking space, hands shaking, and put my car in park. I removed the baby shoes that hung around my rearview mirror and tucked them softly into the glove box and made sure there was a car on both sides of me. I did not want to take any chances of someone reading my license plate or recognizing my vehicle. A security guard sat on a bar stool just outside the door. I dropped a name, paid my two dollars, and stepped into HEAVEN. My body pulsed as I walked through the crowds of women. I swayed against soft contours of beautiful flesh to the beat of Total Eclipse of the Heart and Karma Chameleon.

Over the next five or six years, as I explored my newly found self, the bar was raided, men managed to get in around the security guard and threaten our well being, and parents barged in and dragged young women crying and kicking from the dance floor.

But we were safer there than on the outside. In there, we comforted women who stood among us alone because their partner had been taken to another state in the middle of the night, women who had a partner hospitalized due to accidents, sickness, and drugs, who were not allowed to be a part of the healing. I watched women grieve over the death of the love of their life within our walls, because they could never do it out loud “Out There.”

The years passed, and I got older. Things changed a tiny bit at a time. It was so gradual, that I didn’t even recognize it until one day I realized that I was no longer afraid to touch my partner’s hand for a moment in a crowded room, and I was no longer afraid to say, “No, I have not had male/female intercourse, and no, there is no chance I am pregnant,” when asked by my doctor. My own children grew into adults who were comfortable with being around people who did not mimic them in every way, and they brought friends around whose parents didn’t freak out because there was a lesbian in the home. I even got to legally marry the woman I spent years loving without a piece of paper. We are in the movies and on television. We are senators and lawyers. We are even sneaking into mainstream books.

It has been a time of complacency for me, for many of us. But it should not have been.

If we are to survive, it cannot be again.

I have realized a lot of things in the last year. The threats against us are still real, and they include morality laws and other discriminatory legislation. They include crackdowns on free expression about sexual orientation and the rise of people who feel it is okay to discriminate just because.

I am not sure what happened, but from over here in the Rubyfruit Jungle, I apologize. I should have fought harder all those years ago. I should have kept my eyes open when things felt “better.” I should have realized that while my own being was able to walk more freely, so many beings were still being silenced.

I cannot go backward to change the path I took that brought me to today, nor can you.

However, we can all stand united today.

June is Pride month, and I have never been more proud of my GLBTQIA friends, especially the young ones who put the fluidity of our beings in your face and in mine every day. They are writing their #ownvoices stories. They are self-publishing as #indieauthors what traditional publishers turn away. They touch and kiss and demand to be noticed and accepted. They are our future, and they are beautiful.

We have come too far to let our voices be silenced. Surround your brothers and sisters with love and acceptance. Whether you “understand” the acronyms or pronoun choices of another living being is irrelevant. They are their choices, and they matter. Honor them. All we have is each other. And kindness. And acceptance. Always kindness and acceptance.

Finally, for all of our sakes, please do not say that you “accept difference” or worse yet, “tolerate difference.” Instead say, “I accept you in my world.” Or just, “Hey. You fucking rock.” Difference denotes that there is some sort of club of sameness that you fit into but the other person does not. Sameness says, “I am right and you are wrong, I belong to the Societal Sameness Club, and you do not, but I will let you be in my orbit anyway.” That is bullshit. We live on a continuum. We are. That’s it. All of us are just hanging out here doing the best we can, and I think that’s okay.

No two people are exactly the same. Celebrate who you are, who I am, who she is and he is and they is. Be proud. Be out. Be loud.

P. S. If you want to get a sense of how far we still have to go as a world, the LA Times has an article on seven striking statistics that show the status of gay rights and homophobia across the globe. It is quite sobering.

P. S. S. Writers love stories. Stories save our past from the vapor of time. So, tell us your coming out story in the comments, here, or in your own blog. I can’t wait to read. ❤

I am a new author who struggles every day to balance my life as an educator and my life as a writer. I know how hard it is to stay positive, to learn, and to give back to those who give but, like you, I want it and so I move forward. Baby steps. I hope you will join me on this amazing journey. We are stronger together! View more posts